To promote conservation and restoration of habitat in the Little Tennessee River Basin for the benefit of native fishes and other aquatic wildlife.

The Little Tennessee River Basin is designated as a Native Fish Conservation Area. The aquatic resources of the Little Tennessee River and its tributaries are conserved and restored to the level that native fishes thrive as stable components of diverse ecological communities. Present and future citizens of the Basin benefit from clean water, outstanding outdoor recreation, and a stable economic base.

The Partnership is organized around a Steering Committee and has two Working Groups: Communications & Outreach and Conservation. 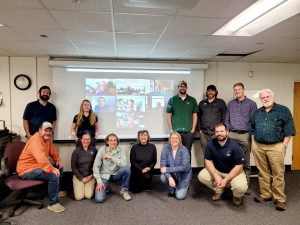 pictured: the 2022 Annual Spring Meeting. Members joined in person, as well as virtually.

Core Values (how we work):

What is a Native Fish Conservation Area?

Native Fish Conservation Areas (NFCAs) are river basins that are managed for the conservation and restoration of native fish and other aquatic species, as well as compatible recreational and commercial uses. The goal of NFCAs is to sustain the integrity of key aquatic habitats in order to maintain long-term persistence of native aquatic species. NFCAs involve a non-regulatory, collaborative approach to conservation that incorporates biological needs and local community values into watershed management practices.

Four critical elements need to be met within a NFCA. The first is the protection and, if necessary, restoration of watershed-scale processes that create and maintain freshwater habitat complexity, diversity, and connectivity. Second, the area should nurture all of the life history pathways of the fishes and other aquatic organisms being protected. Third, the area should include a large enough watershed to provide for long-term persistence of native fish populations. Finally, the groups supporting the NFCA (the ‘Partnership’) should have the capabilities to provide land and water management within the basin that is sustainable over time.

In summary, designation of Little Tennessee River Basin as a NFCA leads to the conservation of valuable native resources through collaboration and supports traditional uses of the river and its tributaries that are important to local communities.

Why the Little Tennessee River Basin?

Within the basin is a significant reach of river that contains all of the aquatic wildlife believed present prior colonial settlement. There are numerous streams in the watershed that are the focus of fish reintroduction efforts. The watershed harbors numerous rare species such as spotfin chub, sicklefin redhorse, Citico darter, yellowfin madtom, Tuckasegee stream crayfish, Appalachian elktoe mussel and the Eastern hellbender.

The Basin is also important as a recreational and economic resource. Numerous native sport fishes including brook trout, rock bass, smallmouth bass and flathead catfish bring significant dollars to the region. The economic impact of trout fishing alone amounts to [tens of millions] of dollars in the Georgia and North Carolina portions of the basin. Fishing and other recreational activities such as canoeing, white-water rafting, swimming, tubing and wildlife watching are vital to the region.

Finally, existing partnerships among citizens, local governments, non-profit organizations, and resource agencies create fertile ground for collaborative progress. Designating the Little Tennessee River Basin as a NFCA can bolster the efforts of these partnerships, supporting a coordinated approach at basin-level conservation. The common interests of these groups should promote the long-term success of aquatic conservation in the Basin.